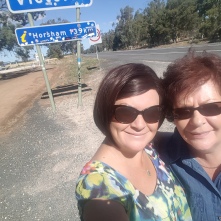 Ma & I on our way to Melbourne.

The lovely Angela from Angel Wigs

The silicone cap which will be made to fit my noggin.

Before I left Adelaide to live in the country I was fortunate enough to meet a gorgeous young woman called Mel at a Alopecia support group dinner.  Mel told me about a $5000 government grant that South Australians suffering from Alopecia are eligible for.  Mel also told me that I needed to go and see Angela in Melbourne as she’s the woman to see about a decent wig.

So with Christmas and the New Year out of the way Mum and I decided to do a road trip to Melbourne to see an angel about a wig.  Meeting Angela was a treat in and of itself, she is a very warm and caring person who is passionate about her job and her clients.  Angela grew up in Broken Hill and became a hairdresser at the age of 17  and then moved to Melbourne and started a salon in St Kilda at 22 years of age.  One day Angela was chatting to another salon owner in the area who was looking to sell her suction based wig agency so Angela decided to combine it with her hairdressing salon which also catered for the orthodox Jewish women who wear net wigs after marrying.  It wasn’t long after however Angela found out about Freedom Wigs, a New Zealand based company which has a different type of suction based wig with an option of a soft more comfortable suction wig designed for people with Alopecia.  Freedom wigs are also known as suction wigs and are made with  100% uncoloured European human hair and have a soft silicone cap which the hair is attached to.

I spent about an hour and a half with Angela to discuss what type of Freedom wig I wanted which was a fairly straightforward conversation because I want my old hairstyle back. I loved my hair before it all fell out so it didn’t take long to show Angela a few photos of how my hair used to look.  Angela then took a 3D scan of my head to make sure that the silicone cap fits perfectly on my noggin and I chose the type and colour that I wanted my wig to be made from.

The most incredible feature of Freedom Wigs is they sit so snuggly on your head you can wear them whilst swimming – even though I no longer live by the beach I’ve really missed the water this summer and am dying to hit the local pool.

It will take about 3 months for my Freedom Wig to arrive but that’s ok, I’ve been without a decent hairdo for 10 months so another few months isn’t going to kill me. So if you have an itchy, hot, uncomfortable, ill-fitting synthetic wig which would float away if you hopped in the pool, it’s time to go see Angela the angel from Angel Wigs!

Airport Tourist Village: http://www.atvm.com.au/ – The girls really looked after me and its only 35 minutes from Angela’s place of business and has free airport shuttle.  Don’t forget to check with Angela to see if her husband is available to collect you from the Airport.

About to have the head scan.

SO SO glad to be driving away from Melbourne & Adelaide CBD back to my little town.